It was billed as a major milestone on the road to reconciliation. Two Federal ministers, a TV crew, journalists and a photographer from ATSIC witnessed a beaming Gatjil Djerrkura's son being circumcised.

Now an act designed to bridge the gulf between black and white Australia has turned sour. Nathan Djerrkura screamed in agony. His apparent pain caused doctors to describe the circumcision as "mutilation", "abominable" and even "child abuse."

This is not a story about condemnation. No-one who saw the look of pride on ATSIC chairman Mr. Djerrkura's face as he explained the ceremony to TV viewers could doubt his sincerity. But it is a story about a media stunt that backfired. It illustrates how much there is still to do to bridge the cultural divide. 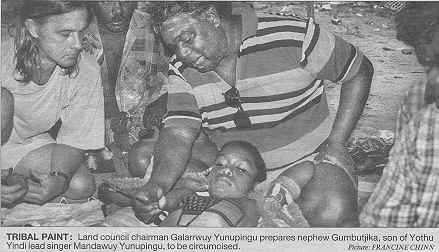 Mr. Djerrkura was forced to issue a denial yesterday that his son had not been anaesthetised after reports of his apparent pain. "There was anaesthetic applied," he said. "I made sure it was applied to my son. We had a male nurse there who performed it an hour before the ceremony was carried out. Nathan was in no pain whatsoever."

But more importantly, an attempt at understanding had served only to highlight the lack of it. "I was very annoyed and disgusted and a bit disappointed by the lack of sensitivity that has been applied," Mr. Djerrkura said. "I  thought I was doing the right thing by exposing my culture for a better understanding of the issues of native title and the stolen generation involved.

"For other people to criticise my culture now is another form of trying to take away my culture. I will think twice about inviting people to that sort of ceremony in the future."

Child psychologist John Irvine said circumcision - removing the foreskin which covers the head of the penis - was an unnecessary medical procedure, and questioned its cultural importance.

"I was taken aback that people could stand and watch," he said. "To see anyone go through pain unnecessarily would have to make you question the custom and whether the initiation could have been done another way."

Pediatrician Fred Leditschke qualified his criticism by saying that learning to endure pain "could well be part of the tribal "rite of passage" of Aborigines.

"It's an uncontrollable procedure," he said. "There are risks of infection and risks of taking too much or too little. And it's barbarous to perform a circumcision in an unsterile environment when the skin has not been prepped."

Even the ministers were clearly distressed. The medical man in Dr. Wooldridge admitted the procedure was painful and recovery could take weeks. The politician, however, maintained: "It's been an extraordinary privilege to be a part of it, and I'm just delighted that Gatjil wanted me to come and share it with him."

The tide has gradually turned against circumcision in Australia. Doctors told The Sun-Herald that the procedure, once regarded as an essential hygiene measure, was unnecessary unless there was a medical need for it.

Only 10 percent of newborn males undergo the procedure. It is unlawful to perform a circumcision on a boy older than two years without anesthetic.

Federal AMA president Keith Woollard said the AMA did not support circumcision but was not willing to enter a debate on Aboriginal circumcision.

"There is no medical basis for routine circumcision but if it is performed it should be done in a sterile environment with anaesthetic," he said.